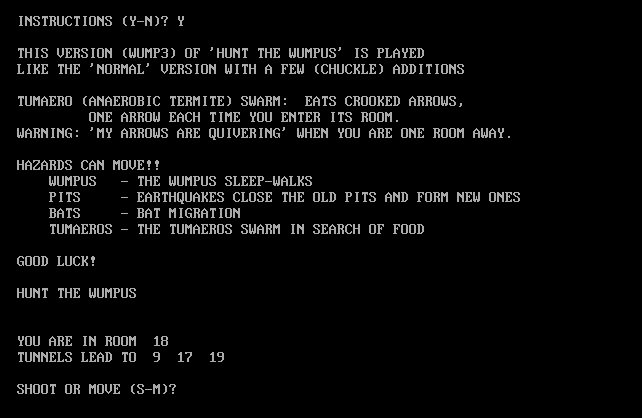 by
Gregory Yob and Howie Franklin

This is Wumpus 3, aka Super Wumpus.
The original Wumpus source from Gregory Yob (later named Hara Ra, and still later named Gregory H. Coresun) was modified by (likely) Howie Franklin. It has never been available since the 1970s.
This was typed from the special "Games" issue of People's Computer Company newsletter, 1974. There were two lines in the original Wumpus source not in the Wumpus 3 source that seemed to be the source of bugs (like how shooting an arrow caused the player to move) but once the lines were restored the problems vanished. Having an "event" occur before the player even starts to act seems to be intentional and not a bug.
The BASIC source code was compiled using DOS QBASIC 4.5, which seems to handle 1970s BASIC code better than any modern compiler, so changes were otherwise minimal.
Images of the source code from the PCC publication are included.